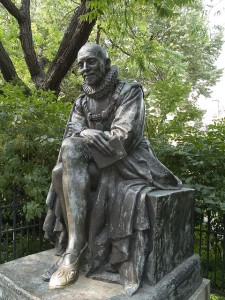 In Bk III, Montaigne’s skepticism is not something he has, an acquisition; it is something that he is, a state of being.  Call it, if you will, a nisus (in F. R. Leavis’ sense of that term), a profound, unwilled set of Montaigne’s whole being.  Unwilled:  for there is no striving in it, no stretching, in particular no self-assertion or desire to exalt himself; it is ripe with a joyful tranquility.  It is a nisus toward the total truth.  But there is no hurry, no hurry; hurry would slow him down.  He fondly and patiently contemplates himself and his life and life.  Each essay is a new elucidation of our human being.  He writes out of a prodigious lucidity, exhibiting himself to himself (and so exhibiting us to ourselves) across a living width of aspects.

He writes under the sign of Socrates.  Socrates’ labor (think of the Oracle and of his understanding of it) is to dismantle double ignorance:  the state of those who think they know but do not know.  Simple ignorance, simply not knowing, typically need not be considered vicious.  Its remedy is most often obvious and requires only time and application.  Double ignorance is vicious; in it, simple ignorance teams with pride.  Socrates attacks double ignorance and scorns the consequences of attacking it, drawing wisdom and courage from unknown deeps in himself.   His highest hope is to attain to a genuinely humble mind–where the humility is simultaneously and wholly epistemological and moral.  He hopes this for his interlocutor as well.  Thomas De Quincy writes,

Without hands a man might have feet and could still walk:  but, consider it, –without morality, intellect were impossible for him; a thoroughly immoral man could not know a thing at all!  To know a thing, what we can call knowlng, a man must first love the thing, sympathize with it:  that is, be virtuously related to it.  If he have not the justice to put down his own selfishness at every turn, the courage to stand by the dangerous-true at every turn, how shall he know?  His virtues, all of them, will lie recorded in his knowledge.

Socrates’ elenchus targets unacknowledged ignorance; to accept aporia is to be humbled both epistemologically and morally.  Is accepting aporia enough to qualify as a skeptic?  Well, say what you will.  I deem there is no reason to refuse that title to someone who accepts aporia.  Notice that, like everything else, accepting aporia has its conditions.  Crucially, someone who accepts aporia recognizes that he has bottomed out, bottomed out in knowledge, bottomed out in pride, and is now ready to go on.   Aporia ends nothing, except perhaps an episode of conversation; in reality, it is a beginning.  Its valence is positive, not negative; the sun is rising, not setting.  Aporia marks the moment when we come to see that what we are contending with is a mystery, not a problem.   —If this be skepticism, what more can be said about it?  It is a skepticism that is turned against worldly wisdom, not a skepticism that is a form of worldly wisdom.  By the standards of worldly wisdom, Euthyphro knows and is rightly proud of what he knows.  By the standards of worldly wisdom, Callicles knows and is rightly proud of what he knows.  Socrates will not judge or be judged by those standards.

Montaigne’s Bk III essays are skeptical in this way, this Socratic way.  To read the essays is to become Montaigne’s interlocutor.  The essays are designed to create aporia in the reader, and to bring about its acceptance.  To almost quote John Berryman: