Chuck can be devious.  Take the first season, beginning with The Kiss (E7).  The Kiss takes place in front of Bryce’s life support pod. Chuck and Sarah (and we the viewers) take it to be a bomb and only later does Sarah (and do we) find out otherwise.

Chuck does not find out about Bryce until later.  Bryce, revived, will talk to no one else. Chuck takes the reappearance of Bryce to mean that Sarah will resume her relationship with Bryce.  Later, when Chuck sees Sarah and Bryce kissing, he believes that she has resumed the relationship.

When Bryce leaves, he tells Sarah, “We will always have Omaha”.  This, Chuck figures out with some help from Casey, is a code, an invitation from Bryce to Sarah to go deep undercover with him.  Chuck fears she has done so, since on the next day she does not show up for work at her normal time (E9).

What we viewers know is that Sarah was packed to leave and obviously was seriously considering Bryce’s offer.  When Bryce calls her on her apartment phone, Chuck calls on her cell. As the episode ends (E8), Sarah is standing between the phones as they continue to ring.  The thought that seems compulsory here is that Sarah is choosing between Chuck and Bryce.

And, in one sense, that is true; but it is true only in one sense.  Sarah is not trying to figure out which man she loves, which man she wants to be with.  She is trying to figure out which *life* to choose. Her life with Chuck is very hard for her, and is becoming harder.  She is in love with him; that is becoming clear to her even if she tries hard to ignore or deny that knowledge. With The Kiss, Sarah revealed herself–not only to Chuck. but to herself.  The Kiss proved that she is not in control with Chuck (and this was shown even before The Kiss, in Sarah’s jealous reaction to Chuck’s interest in Lou).  But until The Kiss, she had a kind of plausible deniability–whatever seemed to show that she cared for Chuck she could explain away, either to him or to herself, as required by the job, by the cover.  That was true even of her actions in response to Lou.

But The Kiss is a different story.  Although Chuck suggests that maybe she would have kissed just anyone in that situation, neither of them takes that suggestion seriously.  Chuck does not press it; Sarah never even responds to it. The Kiss was what Chuck had been wanting all along–One True Thing about Sarah–and it is the last one (at least in many ways) that she wants him to know.  It is no wonder that she re-christens it “The Incident” (a deflating euphemism). She does not want to have to admit to herself just how much she has revealed. Her ability to remain the handler and to treat Chuck as her asset has been severely compromised.

So when she stands between the two ringing phones, her deliberation is not over who she loves, but over whether she can stay with the man she loves and face all of the difficulties and the pain that choice will cause (because Chuck remains the Intersect and she remains a CIA agent) or whether she will go with the man she used to love (or once believed she did) and do what is for her the easy thing, resume her old spy life, her life before Chuck.  One way to put it is that she is standing between ringing phones, deliberating about whether to choose her known, familiar past or her unknown, unfamiliar future. Being with Chuck changes her and will keep changing her. Bryce lets her be, be nothing but a spy (no muss, all fust).

Obviously, the choice takes a toll on Sarah.  She oversleeps the next morning. When she finally does interact with Chuck, she has re-assumed her handler role (she acts toward Chuck much as his prospective new handler does in vs. the Broken Heart).  She has chosen to stay with the man she loves, but, predictably, given that she is Sarah, she has also chosen to try to distance herself from him, to deny in her current behavior what she had revealed in The Kiss.  She wants to be able to stay with him without being with him.  This leads to the perceptible chill in vs. the Crown Vic, and it is what makes her warm smile at him near the end of the episode so welcome.  Though she has not yet made another “mistake”, exactly, she is heading back toward being with him.  Despite herself (and despite her pretense), she cannot be with him and not with him.

So what we have in these episodes is subtle misdirection.  We–along with Chuck–think that the problem is Bryce, is what (who) emerges from the ‘bomb’.  But the problem is what happens in front of the ‘bomb’, not what (who) is in it. Sarah would likely have been tempted to leave Burbank after The Kiss even if Bryce had never shown up:  consider her immediate reaction to The Kiss, consider just how uncomfortable it makes her. I do not deny that Bryce’s return affects Sarah, that it stirs up and confuses her feelings in various ways.  –Of course, she has unsorted feelings for him–she thought he was dead and he isn’t. (That takes some adjustment.). –But I do deny that Bryce is ever (either here in S1 or later in S2) a serious challenge to Sarah’s feelings for Chuck.  (Ellie was right when she asked, “How could anyone choose Bryce over Chuck?”)

All this becomes clear in Bryce’s next visit. Sarah has by then gotten fully clear of her feelings for Bryce; they have been sorted.  And she has more or less allowed it to become clear (in S2 E1-E2) that she does have feelings for Chuck. Her job as his handler keeps them apart, but she is no longer making much of an attempt to keep Chuck in the dark about her feelings.  (Of course, Chuck’s insecurities, especially about Bryce, make it hard for him consistently to believe how she feels about him.) But Bryce himself begins to realize what Sarah feels when she reacts to Chuck’s apparent indifference to her salmon-colored dress.  He becomes certain after Sarah goes off-mission to save Chuck, and after his heart-to-heart surgeon talk with Awesome. 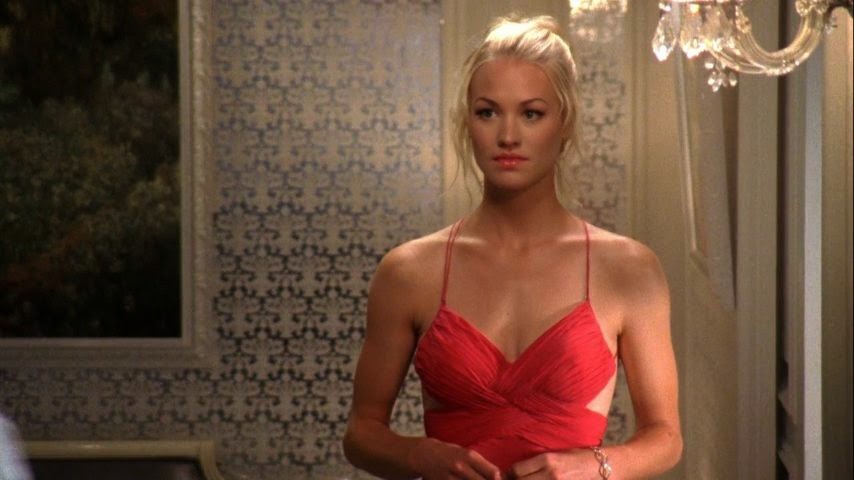 Part of the reason I have gone through this is to make clear how the show misdirects our expectations, tempting us viewers to believe, as Chuck does, that Sarah at worst prefers Bryce to Chuck or at best is dithering between the two men.  She is dithering, but between life paths, between the past, the life she has known, and a future, a new life, mostly unknown, that Chuck opens to her.  That life, its vulnerabilities and its threat of normalcy, frightens her in many ways–more, much more than does the spy life with its duplicities and threat of gunplay.  Even so, that new life is the life she chooses; she chooses her future, not her past.

Leave a Reply to Stevie B. Cancel reply